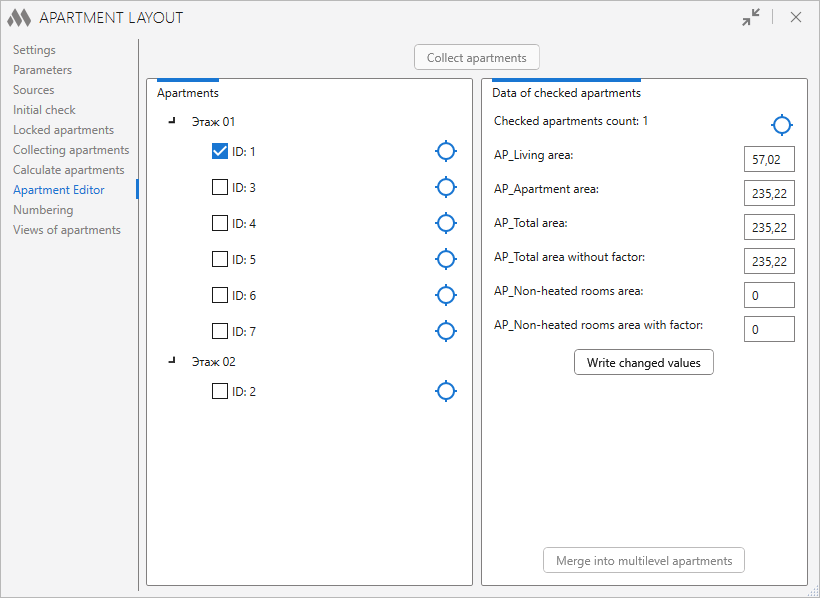 And next in this article, we'll talk more about this tab and our idea of working with multilevel apartments.

As with any other plugin, we get feedback from users. And one of them is often a request to add support for multilevel apartments. And a couple of times we also got a request to make the parameters created by the plugin editable. After some thought, we realized that we can meet (as we believe) these requests with a single modification and added a new tab "Apartment Editor" without making the parameters available for editing.

This tab has two main tasks - to manually change the areas and to merge the apartments into multilevel apartments.

With the manual alteration of the areas is simple - you select (check the box) one or more apartments, make changes to the values of the areas and press the button Write changed values. The main goal is to get rid of the hundredths margin of error that sometimes occurs.

Things are more complicated with multilevel apartments. At first we thought that the definition of multilevel apartments should be done automatically, but we quickly abandoned this idea. While the connection of rooms through openings and room separators is clear, the definition of the connection of rooms between levels is a practically unsolvable question. So we decided we needed to solve the problem manually or in a semi-automated way.

It was immediately clear that we would need to add a new parameter to identify multilevel apartments. First we thought about making a parameter of type "Yes/No", but firstly - it is impossible to change it in groups, and secondly - this parameter is not very informative. So we decided to add the parameter "AP_Levels count" with the type "Currency". If the parameter says 1 (or 0), it is a one-level apartment, if 2 - two-level, 3 - three-level and so on. Although perhaps 3 is the limit in reality.

When you check several apartments on different floors in the "Apartment Editor" and click Merge into multilevel apartments, the plugin will do the following:

With multilevel apartments there are important nuances. The first obvious one is that if you recalculate areas with plugin on the view and not in the model, the rooms on another level will have incorrect data. The other nuances we do not know yet, but we think they are available, so we are waiting for feedback. Of course, we can somehow work around the first nuance in the future, but for now we decided not to focus on this - first we need to get feedback from users.