Today's update of the ModPlus ESKD function is accompanied by a whole news on the website for a reason, therefore I strongly recommend reading it to anyone who uses this function.
So, recently there was an update of the function with the addition of a new primitive "Ground line". I wrote about this in our VK group. As I wrote in that record, this update taught me how to develop entities with many points. Thus, I mastered all the basic specifics of the development of entities and realized that it was time to do refactoring and code optimization. If you suddenly do not know that it is - and do not clog your head.

After two weeks of work on the code, almost everything was rewritten! Those. the entire basic part, which is responsible for the work of intellectual entities, for the work of the style editor and the work of the properties palette. And now, when developing new entities, I will focus only on their behavior - how their geometry “works”. And a lot of routine just disappeared!

But, before I say about the visible updates, you must also say about the main disadvantage - a violation of backward compatibility. In simple terms, entities created before the release of this update will no longer work! And I strongly recommend simply replacing them with new ones out of harm's way. Unfortunately, this is a necessary evil that will simplify work in the future. Fortunately, not many entities have been developed yet and, I hope, they will not bring strong problems.

Well, briefly tell you about what has changed. In fact, just a lot of things have changed, but mostly in the stuffing. Those. users will most likely not notice much difference. But what is really there - I myself will not remember everything.

The properties palette and style editor are now built automatically and they themselves determine which properties to take from the entities. And this is awesome! Before that, I created everything for each primitive manually. Some properties have been added/removed for the Ground Line and Axis, but I don’t remember which ones anymore.

When creating entities, the range of the mouse movement at which the primitive was redrawn was reduced. Now entities are created more smoothly. And oddly enough, but the performance is not greatly affected.

The work on processing the properties of the entity with their display in the palette has been optimized. Even with the naked eye it became noticeable that my palette reads properties faster than the AutoCAD palette does.

In the editor of styles (settings) minor corrections in the design were made - we will not focus on this.

A new command has been added, which is called from the context menu - Create analog.

This command allows you to create a new instance of an intellectual entity, assigning (almost) all the properties of a sample primitive to it. Be sure to try.

Of course, the release of such an update simply had to be accompanied by a new entity! Therefore, meet - the designation of the Section! Well, the way I look at the Autodesk SPDS-Module from development (and I am sure that my users are also), I would like to note several features of my Section: 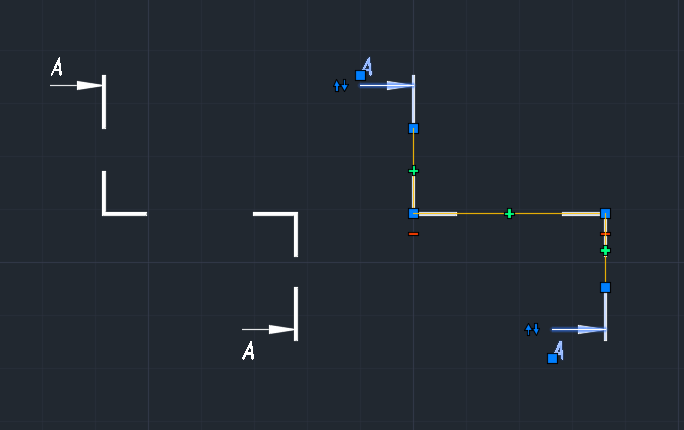 And finally, I appeal to the responsiveness of my users - do not be lazy and write in the comments (on the website or in the VK) which entities you need! Help me make an importance rating for the development of new entities!