Function Tools contains commands that are too small to make them separate functions. And today another one is added to the list of commands - "Rebars outside host".

The principle of operation is simple - you run a check in the current project, and the command is looking for rebars, which is located outside its host. If the rebar has the "Single" layout, then the check is made on its position in the host. If there are other types of layout, then a check is made that the rebar protrusion from the host. The command also works with rebars in the system (included in, for example, area reinforcement) and performs a check for protrusion from the host. Test result (rebars) can be selected: 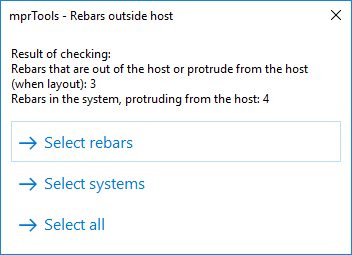 To be honest, I'm not quite sure about the need for such command. Just asked my wife to make her =)